Suppose that we want to sample from a distribution

that is difficult or impossible to sample from directly, but instead have a simpler distribution

In order to be able to reject samples from

such that they are sampled from

must “cover” or envelop the distribution

. This is generally done by choosing a constant

is often called the envelope distribution. A common criterion for accepting samples from

is based on the ratio of the target distribution to that of the envelope distribution. The samples are accepted if

, and rejected otherwise. If the ratio is close to one, then

must have a large amount of probability mass around

and that sample should  be more likely accepted. If the ratio is small, then it means that

has low probability mass around

and we should be less likely to accept the sample. This criterion is demonstrated in the chunk of MATLAB code and the resulting figure below: 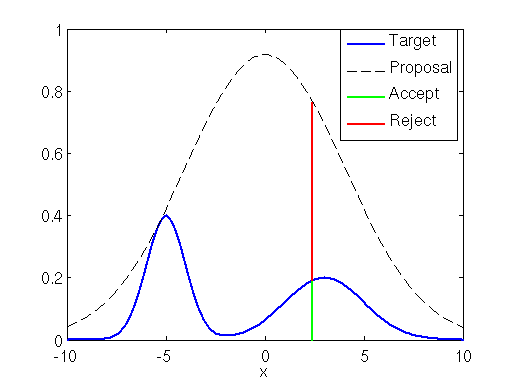 to ensure that the proposal distribution covers

. We then sample from

, and compare the proportion of

. If we compare this proportion to a random number sampled  from

This next example shows how rejection sampling can be used to sample from any arbitrary distribution, continuous or not, and with or without an analytic probability density function. 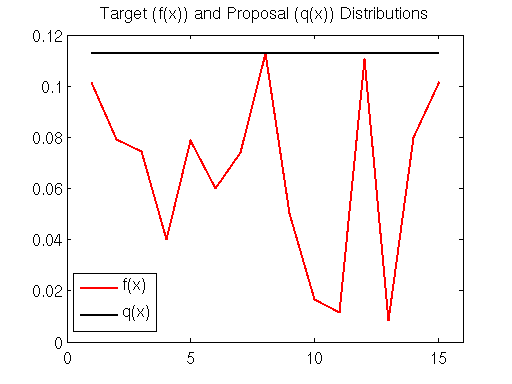 Random Discrete Target Distribution and Proposal that Bounds It.

The figure above shows a random discrete probability density function

generated on the interval (0,15). We will use rejection sampling as described above to sample from

. Our proposal/envelope distribution is the uniform discrete distribution on the same interval (i.e. any of the integers from 1-15 are equally probable) multiplied by a constant

that is determined such that the maximum value of

lies under (or equal to)

Rejection sampling from the unit circle to estimate

Though the ratio-based acceptance-rejection criterion introduced above is a common choice for drawing samples from complex distributions, it is not the only criterion we could use. For instance we could use a different set of criteria to generate some geometrically-bounded distribution. If we wanted to generate points uniformly within the unit circle (i.e. a circle centered at

), we could do so by sampling Cartesian spatial coordinates

uniformly from the interval (-1,1)–which samples form a square centered at (0,0)–and reject those points that lie outside of the radius

: Because a square that inscribes the unit circle has area:

and the unit circle has the area:

We can use the ratio of their areas to approximate

from the samples. One-hundred thousand 2D points are sampled uniformly from the interval (-1,1).  Those points that lie within the unit circle are plotted as blue dots. Those points that lie outside of the unit circle are plotted as red x’s. If we take four times the ratio of the area in blue to the entire area, we get a very close approximation to 3.14 for

The MATLAB code used to generate the example figures is below: