In this post I will review the gradient descent algorithm that is commonly used to train the general class of models known as Boltzmann machines. Though the primary goal of the post is to supplement another post on restricted Boltzmann machines, I hope that those readers who are curious about how Boltzmann machines are trained, but have found it difficult to track down a complete or straight-forward derivation of the maximum likelihood learning algorithm for these models (as I have), will also find the post informative.

First, a little background: Boltzmann machines are stochastic neural networks that can be thought of as the probabilistic extension of the Hopfield network. The goal of the Boltzmann machine is to model a set of observed data in terms of a set of visible random variables

and a set of latent/unobserved random variables

through a set of weighted,  symmetric connections between all visible and hidden units (but no connections from any unit to itself). The graphical model for the general Boltzmann machine is shown in Figure 1.

Figure 1: Graphical Model of the Boltzmann machine (biases not depicted).

Given the current state of the visible and hidden units, the overall configuration of the model network is described by a connectivity function

defines the connection strength between the visible and hidden units. The parameters

define the connection strength amongst hidden units and visible units, respectively. The model also includes a set of  biases

that capture offsets for each of the hidden and visible units.

The Boltzmann machine has been used for years in field of statistical mechanics to model physical systems based on the principle of energy minimization. In the statistical mechanics, the connectivity function is often referred to the “energy function,” a term that is has also been standardized in the statistical learning literature. Note that the energy function returns a single scalar value for any configuration of the network parameters and random variable states.

Given the energy function, the Boltzmann machine models the joint probability of the visible and hidden unit states as a Boltzmann distribution:

. Here we assume that all random variables take on discrete values, but the analogous derivation holds for continuous or mixed variable types by replacing the sums with integrals accordingly.

. To further simplify things, let’s also assume that we calculate the gradient of the likelihood based on a single observation.):

The gradient calculation is as follows:

Here we can simplify the expression somewhat by noting that

If we also note that

, and use the definition of conditional probability

, we can further simplify the expression for the gradient:

is the expected value under the distribution

. The second part is expected gradient of the energy function with respect to the joint distribution over all variable states. However, calculating these expectations is generally infeasible for any realistically-sized model, as it involves summing over a huge number of possible states/configurations. The general approach for solving this problem is to use Markov Chain Monte Carlo (MCMC) to approximate these sums:

is the sample average of samples drawn according to the process

. The first term is calculated by taking the average value of the energy function gradient when the visible and hidden units are being driven by observed data samples. In practice, this first term is generally straightforward to calculate. Calculating the second term is generally more complicated and involves running a set of Markov chains until they reach the current model’s equilibrium distribution (i.e. via Gibbs sampling, Metropolis-Hastings, or the like), then taking the average energy function gradient based on those samples. See this post on MCMC methods for details. It turns out that there is a subclass of Boltzmann machines that, due to a restricted connectivity/energy function (specifically, the parameters

), allow for efficient MCMC by way of blocked Gibbs sampling. These models, known as restricted Boltzman machines have become an important component for unsupervised pretraining in the field of deep learning and will be the focus of a related post.

Artificial neural networks (ANNs) are a powerful class of models used for nonlinear regression and classification tasks that are motivated by biological neural computation. The general idea behind ANNs is pretty straightforward: map some input onto a desired target value using a distributed cascade of nonlinear transformations (see Figure 1). However, for many, myself included, the learning algorithm used to train ANNs can be difficult to get your head around at first. In this post I give a step-by-step walk-through of the derivation of gradient descent learning algorithm commonly used to train ANNs (aka the backpropagation algorithm) and try to provide some high-level insights into the computations being performed during learning. 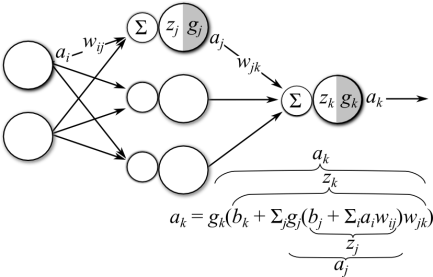 Figure 1: Diagram of an artificial neural network with one hidden layer

Some Background and Notation

are multiplied by a set of fully-connected weights

connecting the input layer to the hidden layer. These weighted signals are then summed and combined with a bias

(not displayed in the graphical model in Figure 1). This calculation forms the pre-activation signal

. In a similar fashion, the hidden layer activation signals

is added, and the resulting signal is transformed by the output activation function

to form the network output

. The output is then compared to a desired target

and the error between the two is calculated.

Training a neural network involves determining the set of parameters

that minimize the errors that the network makes. Often the choice for the error function is the sum of the squared difference between the target values

and the network output

(for more detail on this choice of error function see):

This problem can be solved using gradient descent, which requires determining

in the model. Note that, in general, there are two sets of parameters: those parameters that are associated with the output layer (i.e.

Before we begin, let’s define the notation that will be used in remainder of the derivation. Please refer to Figure 1 for any clarification.

Since the output layer parameters directly affect the value of the error function, determining the gradients for those parameters is fairly straight-forward:

Here, we’ve used the Chain Rule. (Also notice that the summation disappears in the derivative. This is because when we take the partial derivative with respect to the

-th dimension/node, the only term that survives in the error gradient is

-th, and thus we can ignore the remaining terms in the summation). The derivative with respect to

is zero because it does not depend on

. Also, we note that

where, again we use the Chain Rule. Now, recall that

The gradient of the error function with respect to the output layer weights is a product of three terms. The first term is the difference between the network output and the target value

to be all the terms that involve index k:

is some step size (“learning rate”) along the negative gradient.

As we’ll see shortly, the process of backpropagating the error signal can iterate all the way back to the input layer by successively projecting

, then through the activation function for the hidden layer via

to give the error signal

, and so on. This backpropagation concept is central to training neural networks with more than one layer.

As far as the gradient with respect to the output layer biases, we follow the same routine as above for

. However, the third term in Equation (3) is

, giving the following gradient for the output biases:

is somewhat more involved. However, the process starts just the same:

Notice here that the sum does not disappear because, due to the fact that the layers are fully connected, each of the hidden unit outputs affects the state of each output unit. Continuing on, noting that

Here, again we use the Chain Rule. Ok, now here’s where things get “slightly more involved”. Notice that the partial derivative in the third term in Equation (7) is with respect to

is a function of index

. How the heck do we deal with that!? Well, if we expand

, we find that it is composed of other sub functions (also see Figure 1):

From the last term in Equation (8) we see that

is indirectly dependent on

.  Equation (8) also suggests that we can use the Chain Rule to calculate

. This is probably the trickiest part of the derivation, and goes like… 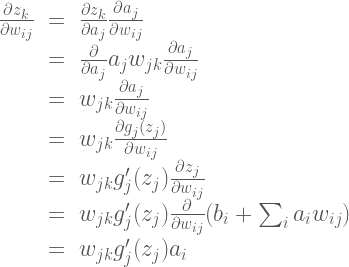 in Equation (7) gives the following for

). For the output weight gradients, the term that was weighted by

was the back-propagated error signal

, but the error signal is further projected onto

and then weighted by the derivative of hidden layer activation function

, and includes all terms in Equation (10) that involve index

. This definition results in the following gradient for the hidden unit weights:

in an arbitrarily-deep neural network, we simply need to calculate the backpropagated error signal that reaches that layer

and weight it by the feed-forward signal

. However, unlike Equation (9) the third term that results for the biases is slightly different: 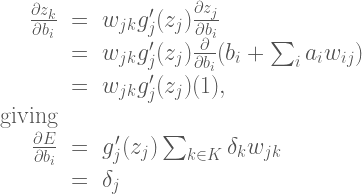 In this post we went over some of the formal details of the backpropagation learning algorithm. The math covered in this post allows us to train arbitrarily deep neural networks by re-applying the same basic computations. Those computations are:

and the activation functions

are differentiable. For more details on implementing ANNs and seeing them at work, stay tuned for the next post.